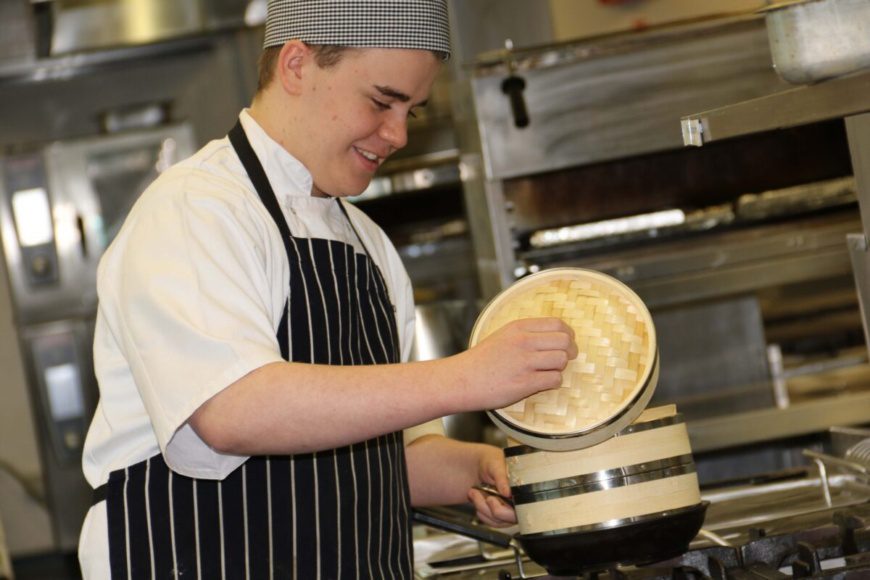 A YOUNG chef will have a tale to tell after his recipe for a sustainable fish dish secured him a place in a prestigious cookery final.

Darlington College student Angus Duncan is preparing to compete at the highest level against chefs from Michelin Star restaurants as he tries to secure the coveted Master Chefs title.

The Institute of Master Chefs was formed in 1980, the organisation becoming The Master Chefs of Great Britain in 1982.

It provides a forum for the exchange of culinary ideas and aims to further the profession through the training and guidance of young chefs.

Seeking to promote all that is best about British cuisine and produce, it strives to improve skills through competitions, masterclasses, trips to producers and the awarding of training diplomas.

In this year’s contest, and partnership with the Marine Conservation Society, young chefs were tasked with creating a dish using one of the UK’s favourite fish, haddock.

For Angus, 18, of Richmond, the competition marks a high point in a catering calling that began when he was just eight and he started helping his grandma Jean Williams in the kitchen.

“Ironically, it was because my grandma didn’t enjoy cooking that she used to get me in the kitchen to help her – but I loved it, anything from bacon for breakfast to a Sunday lunch,” said Angus, who is studying NVQ L3 professional cookery at Darlington College and hopes to stay on to study a new foundation degree in hospitality and tourism management being planned.

“I was quite good, then started to pick up extra skills from watching TV programmes, such as Master Chef. My tutor suggested I enter this year’s contest so I worked up a dish and submitted it. I was delighted when they contacted me to say I was in the final.”

Angus, who works at the Fox Hall Inn, on the A66 near Ravensworth and hopes one day to be a chef on a superyacht, came up with the idea of steamed haddock with Asian slaw, stir fried cabbage with wild garlic and ginger and lemongrass broth.

“It is going to be hard work, but fingers crossed, and even reaching the final will look great on my CV,” he said. “I love Asian food and my parents were impressed with its kick of chilli and ginger – but not so much grandma who doesn’t really like strong flavours.”

His tutor Dawn Cobb-Neate said: “It is a lovely dish, nice and summery with a light broth, simple looking but packed with flavour.

“To reach the final 10 is amazing, particularly as the competition is for under 25s and he will be up against chefs already working in the industry. When I saw the list of competitors and that some are from Michelin star restaurants I realised how well he had done. He is only in his second year of training and both of those have been in lockdown. But he has always been very motivated and conscientious.”

The final will be by video conference with the results live-streamed at 10am on April 30. The winner gets £250 cash and equipment worth another £250.