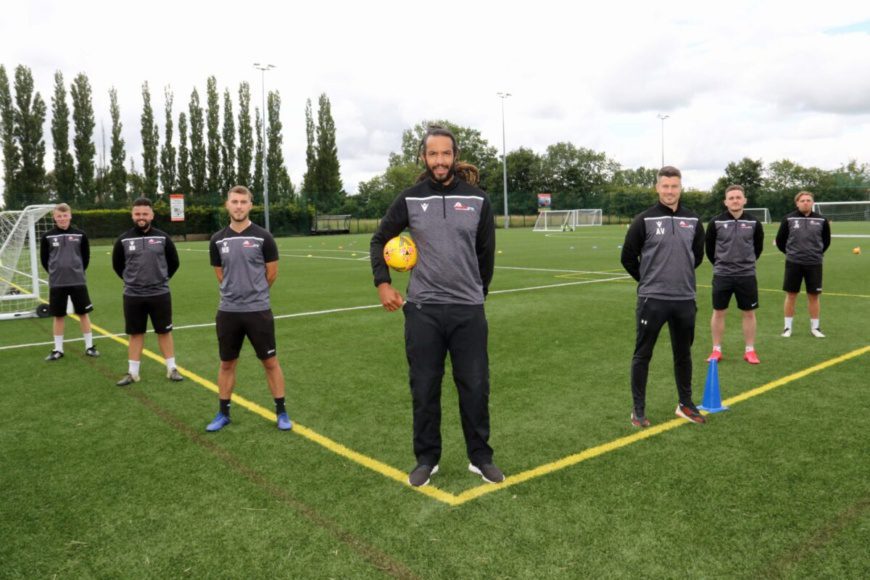 A SQUAD of football hopefuls are being offered a world of opportunity in a unique partnership between a college and the professional game.

Around 50 students have already signed up with Darlington College and the Martin Gray Football Academy, which provides qualifications offering opportunities as a player, coach, referee or in the sport and leisure sector.

Owned by former professional player and manager Martin Gray, the academy is managed by ex-Darlington College students Deano Browne and Anthony Verity, who lead a team of coaches, many of whom have also followed this unique partnership route.

The college/academy initiative not only offers students the academic and vocational skills to work in the world of sport but also the chance of work experience, apprenticeships and full-time employment in anything from playing and coaching to refereeing.

Seven of the academy’s top team started as students at Darlington College and are now running education programmes for young people, ranging from fulltime further education students to primary and secondary school children and others who are educated outside the traditional school setting.

Martin said: “The prospects within sport are endless whether that is as a player or the amazing careers around officiating. There are some fantastic openings on our doorstep and others in just about every country in the world.”

Deano’s career began in earnest at Darlington College 18 years ago after what he admits were relatively unsuccessful school days.

“I came alive at Darlington College,” he said. “I wanted to be a footballer but didn’t get on with school. I did the level 2 and 3 Btec in sport, managed to get my maths and English and by the time I’d finished was coaching in the community.

“From there I was able to move to America to coach for UK International Soccer in San Francisco. I used to travel over the Golden Gate Bridge every day to work, now I cross Haughton bridge every day.”

He said globally football was a very close-knit industry. “I remember meeting a lad who had been on the same course at Darlington College when we were both in the bar at the Mandalay Bay Hotel in Las Vegas,” he recalled.

“We got chatting and decided to launch our own coaching company which we later amalgamated with MGFA. I became a primary coach, then worked my way up to become the manager of the company.

“It has been an amazing journey for me and it was Darlington College that gave me the confidence to set up my own business at 23, move to the US and get my UEFA B licence.”

Operations manager and head of coaching Anthony Verity, of Darlington, also began his career wanting to be a player but after being released by a club’s academy decided to study at Darlington College.

A degree in sports science followed, combining his studies with working with Martin Gray, before taking up an opportunity to move to Australia, where he was employed by the Total Football Academy and played for Magic United on the Gold Coast.

“Martin then offered me a fulltime job as a coach and I have been here ever since, working my way up to operations manager and gaining my UEFA B licence,” he said. “Martin always supported me and gave me the confidence as a young person to be able to walk onto a pitch with a bag full of balls and to teach more than 20 children, which is now just a normal day and I love it.”

A perfect endorsement of the joint initiative comes in the form of Martin’s son Jonty, who left school to join the programme at Darlington College. “I was so lucky having such great mentors around me and as well as gaining my level 1 and 2 qualification I have learnt so much on the job,” said Jonty, who is a coach with MGFA.

“I went to college with a lot of the current coaches and we are a tight set of lads. Because we are all mates it never feels like work and I’m looking forward to helping to develop the business and expanding the opportunities for young people even further.”

For Ross Howell, 18, the initiative provided the chance to go from school boy footballer to apprentice.

His career started at primary school when he joined a football academy in town run by his uncle Paul Bielby, a former left winger with Manchester United.

After leaving Longfield School he joined the level 3 course at Darlington College. He has just signed for Durham FC, which plays in the Wearside League, and has been taken on by MGFA as an apprentice.

“Martin gave me a taste of coaching and I realised how much I enjoy working with young people in schools,” he said. “I want to be a top coach and have taken on a girls’ team of 14-year-olds, Darlington 21 All Stars, which I’m learning a lot from managing. Hopefully the next step will be to manage an U18 team.

“I also got the chance to go to Salou in Spain for a pre-season tournament at which I learnt a massive amount as a player and a coach. It helped me gain confidence and develop my leadership qualities.”

Coach Lewis Walton came into contact with Deano as a player and was encouraged to enrol on the Darlington College course.

He said: “I really liked the way he coached and I thought I would like to play and coach like that. Darlington College was great and the training in the classroom and on the pitch gave me so many new skills. I now want to become the best coach I can be so I can pass on my knowledge to others.”

Coach Nathan Stephenson was also taken under the wing by Martin after being released by a club’s academy. He joined the Darlington College/MGFA programme and has never looked back.

“Martin offered me work experience while I was on the course which helped me while I studied,” he said. “I’ve been with him five years now and learnt so much about the business. I would recommend the course because it is really professional, gives you a clear insight into the profession and everyone here really knows what they are doing.”

For coach Brad Blythe, of Newton Aycliffe, the journey saw him make new friends for life. He said: “I started on the Darlington College Btec in 2014 and didn’t know anyone on the course.

“I absolutely loved it and within weeks made new friends who I know will be there for life. I was ok at football when I started the course but it made me so much better and I really enjoyed the games on Wednesday afternoons. Martin offered me an apprenticeship and then a fulltime job – I’ve been buzzing ever since.

“I love being part of the sports industry and am looking forward to securing my UEFA pro-licences. My confidence has grown massively and it’s great being able to pass on everything I know to the younger generations.”