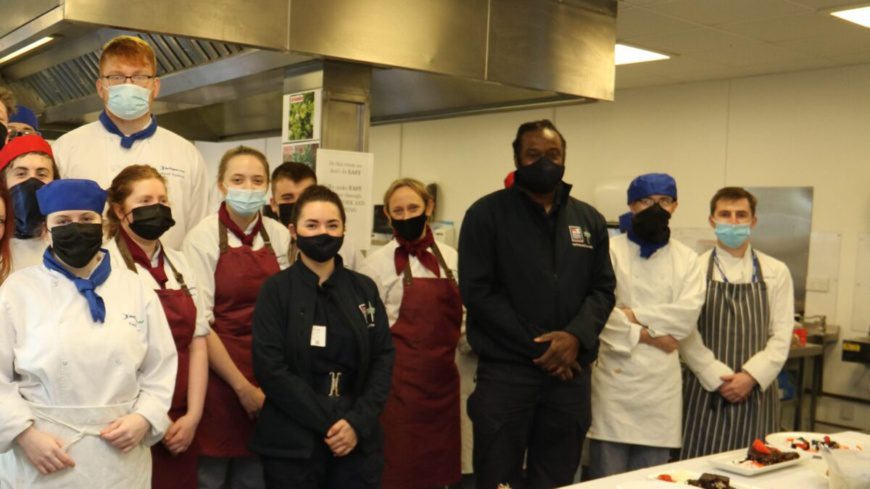 CATERING students proved to be all shipshape in the kitchen as they came under the watchful eye of two Royal Navy chefs.

The Darlington College students were under orders to produce a seafood paella and chocolate brownie dessert against the clock in a 90 minute ready, steady, cook type challenge.

Chefs Leading Hand Emmanuel Craig and Able Rating Drusilla Clarke, from the Royal Navy’s Logistics Catering Services, were on hand to help the students with their high pressure task and taste-test their culinary offerings.

They also gave the students and insight into life in the Royal Navy, serving around the world on land and sea, including the Baltics, Mediterranean, Caribbean, Africa and South Georgia.

For L2 pastry and confectionary student Tom Dunn, 18, of Newton Aycliffe, it was the ideal opportunity to question the chefs on life in the military as he hopes to serve in the Royal Marines one day.

He said: “I have already worked in retail and kitchens and it seems to me that the Royal Marines would offer me something fresh. It was really useful to me being able to talk and work alongside people who are already serving in the Royal Navy.”

Fellow student, Ciara Coupe, 20, of Bedale, also found the experience invaluable, particularly as she has designed a menu for an up and coming evening event at the college’s Glasshouse restaurant on February 8.

“It has been really useful working as a team against the clock and great practise for the evening event, when we shall be serving a £24.95-a-head three course meal.”

Leading Hand Craig, of Trinidad and Tobago, who has been in the Navy for the past nine years, had high praise for the college’s kitchen facilities and the enthusiasm and skills of the students.

“It was so great to see the students so engaged in the task and apart from doing a great job with the food they found time to ask us load of questions about the Navy,” he said.

Able Rating Clarke added: “I did level three catering at college and that really helped me when I joined the Navy three years ago as it gave me a head start on other new recruits.

“I was assigned to HMS Kent, a Type 23 frigate, for a four month deployment to the Mediterranean, Baltics and Gulf, which was amazing. It has been great today getting to know the students and hearing about their aspirations.”

Darlington College lecturer Dawn Cobb-Neate said: “We are really grateful to the chefs for coming in to give our students an insight into the opportunities in the Armed Forces. They loved working with them and were inspired to produce some really great food under the pressure of competition and time.

“It was great to watch the students grow into the competition and seeing how they rose to the challenges of leadership and adapting to unfamiliar surroundings in our skills kitchen, which gave them an accurate taste of what life will be like in the industry.”