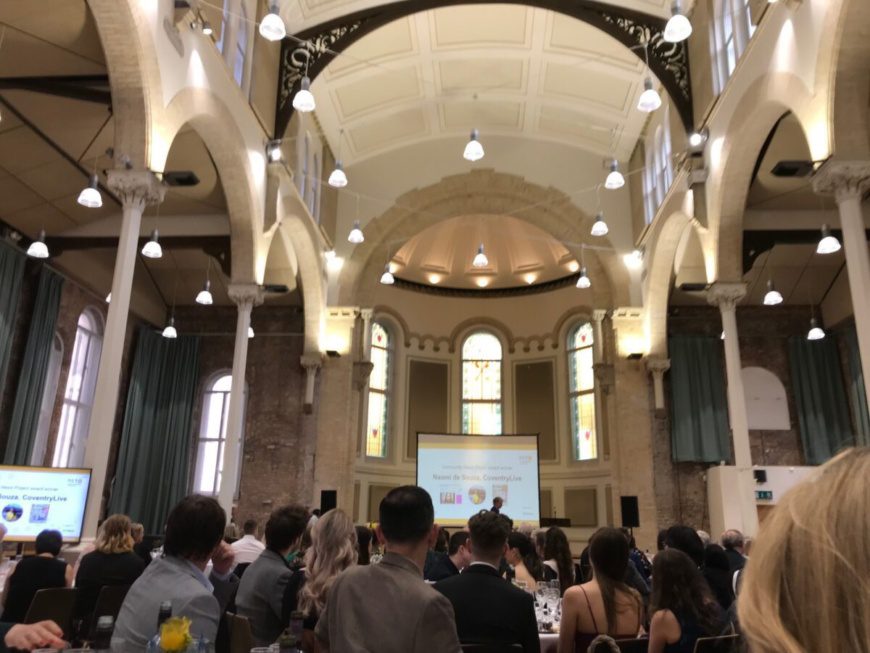 Darlington College journalism alumni and a new community reporter have won national commendations for their work.

Brad Deas, James Robinson, Nathan Atkinson and Sophie Skyring were honoured at the NCTJ Awards for Excellence at a ceremony in Manchester presented by Nick Powell from Sky Sports News.

Brad Deas was commended in both the Trainee Top Scoop and Community News Project categories.

Brad trained as a journalism apprentice and a senior community reporter at Darlington College, working throughout his training at the Telegraph and Argus in Bradford. He is now a senior digital reporter at the Newsquest title.

Brad’s colleague Nathan Atkinson took away a commendation for his sports work for the Telegraph and Argus and sister title the Keighley News. Nathan trained at Darlington as a journalism apprentice.

James Robinson, newly appointed Local Democracy Reporter for  Chronicle Live and BBC, was commended as a trainee. James studied as an apprentice while working at the Hexham Courant and went on to achieve his senior qualification and a media law award. In his new role James will be covering Northumberland.

Sophie Skyring, currently an apprentice community reporter at the college, took away a commendation in the apprentice of the year category, just months into her role in Norwich, working for Archant.

Editor Richard Porritt said of Sophie: “It is extremely rare to find a trainee reporter who consistently brings in the exclusive, high-quality stories we would expect of a senior journalist.  And yet that is what we have got with Sophie Skyring – and she delivers day after day.

Sophie is not just the dream trainee for a newsdesk, she is exactly what our city as a whole needs.

I have rarely met a journalist who cares so genuinely about the people they write about. “

Picking up the Community News Project Award  on the day was NCTJ senior Naomi de Souza who studied for her senior qualification at Darlington.

Congratulations too to seniors Laoise Gallagher, Rosie Boon and Alex Davis too on their awards and commendations.