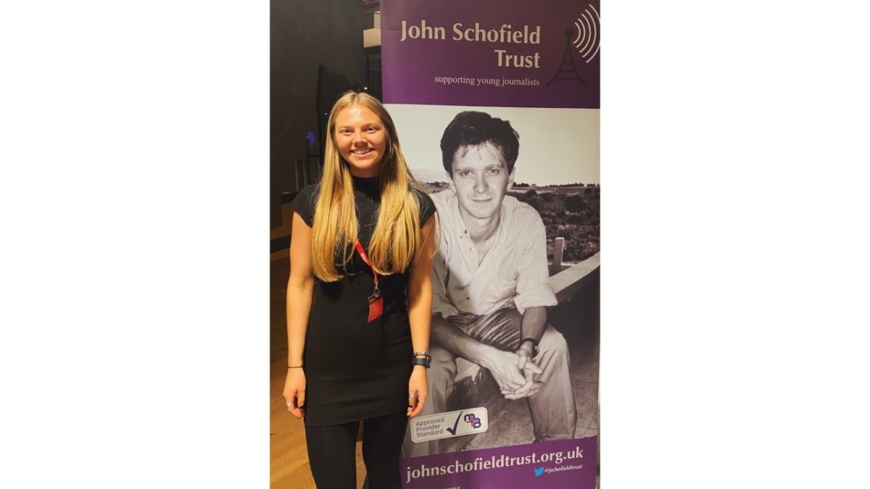 THE writing is on the wall for a budding journalist who overcame the rigors of lockdown to successfully complete her training and has now been nominated for a coveted national award.

She will now come under the wing of multi-award-winning documentary presenter and journalist Layla Wright.

“It was a total shock,” said Georgia, of Prudhoe, Northumberland. “Even just to be nominated for the NCTJ award is a big achievement in what is still a really early stage of my, hopefully, long career.”

Currently a reporter with Newsquest’s Hexham Courant newspaper, the 25-year-old originally wanted to work abroad as a teacher after leaving Prudhoe High School with A levels in French, Spanish and English. Georgia went to York University where she gained a first class honours degree in English language and linguistics.

But after a placement in a school she realised teaching wasn’t for her and went instead for an apprenticeship with the Hexham Courant in partnership with the NCTJ at Darlington College.

“I have totally loved the apprenticeship and it has been the best of experiences for me,” she said. “An apprenticeship is a great way to learn while experiencing the realities of the job. It has given me so much confidence, as has knowing I have the support of my lecturer”

Soon after she started as a trainee the COVID pandemic struck and she was forced to work from home and complete her college work remotely.

“I did miss the interaction but it did force me to get on and learn what I needed as quickly as possible,” she said. “After two and a half years on the Courant I’m one of the more senior reporters now.”

So far she has enjoyed the variety of work on a local paper with stories ranging from a mother of a murder victim’s campaign to a hospital cat being awarded a pet Oscar, which went viral.

As well as working on the paper she volunteers on Radio Prudhoe and is hoping for a career away from print and possibly abroad.

“The best way to learn is just to throw yourself into it,” she said. “I’m looking forward to working with my mentor in January and who knows what opportunities this will lead to.

“I just love it; no two days are ever the same, it’s so interesting and often great fun,” she said.