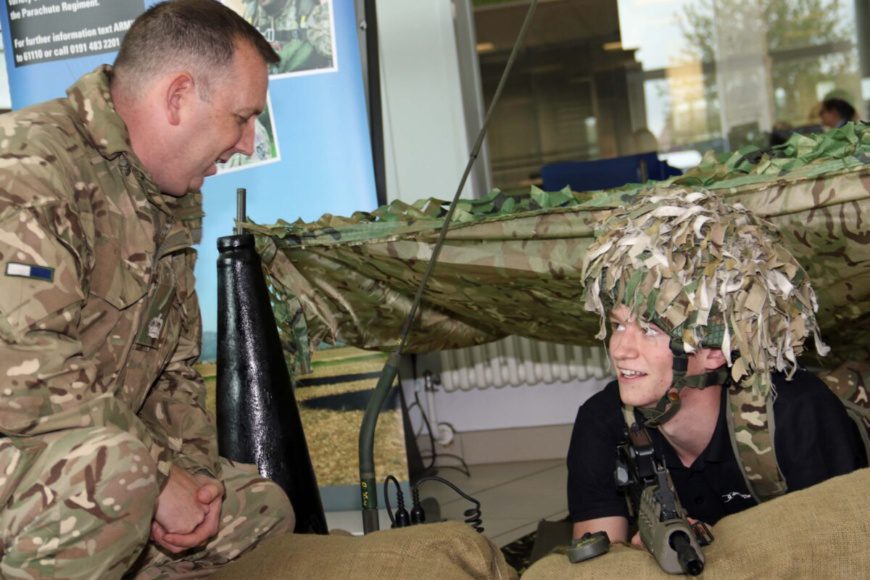 STUDENTS have a host of new opportunities in their sights after their college teamed up with the Army to explore the array of careers available in the Forces.

An army of advisors descended on Darlington College to give students an insight into the development prospects available in the Army once they have finished their studies.

Organiser of the Army Advantage Programme Sgt Andrew Crease, a recruiter based in the Army Careers Centre, Middlesbrough, said: “The aim is to show students the opportunities available to them free charge once they leave Darlington College. It is so much more than the stereotypical image of an infantry man with a gun.” 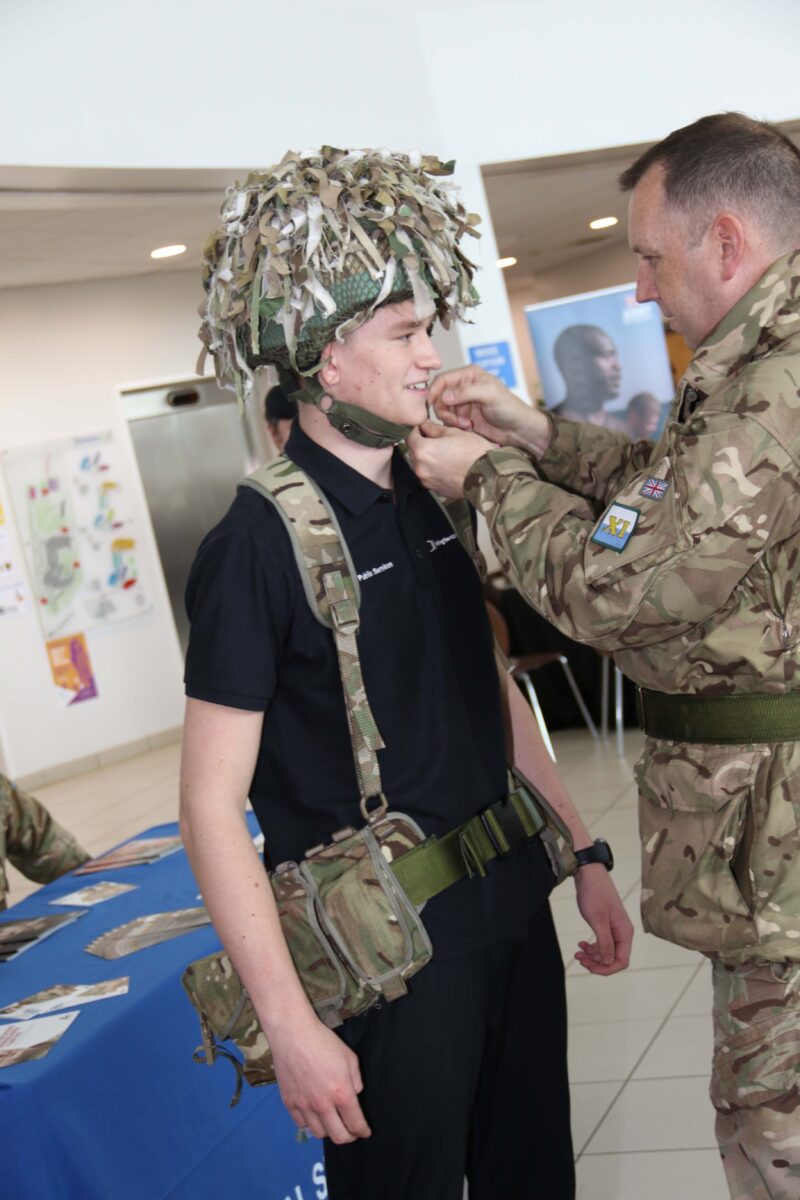 He said on top of traditional combat roles recruits could learn engineering skills, logistics and support, human resources, accountancy, IT and communications, catering and medical qualifications, up to the level of degree standard and avoiding student debt.

“And they get paid to learn with technical tradesmen starting on £21,500,” said Sgt Crease, who joined the Royal Engineers 18 years ago. “Then there are a host of benefits including free gym membership, subsidised meals, travel and health care, as well as the chance to take part in activities such as skiing, scuba diving, sailing and climbing and see the world. I have absolutely loved it.”

He said being in the forces also made recruits more employable when they returned to civvy street.

“Ex-soldiers are in demand because they make such great employees; they are disciplined, well turned out, respectful and they don’t quit or take the easy option,” he said.

Darlington College marketing and engagement manager Claire Turner said: “The day broadens students’ horizons by showing them the career progression opportunities that exist in the Armed Forces, viable options in all manners of areas they might not have considered.”

Paratrooper Pte Jamie Phenny, 27, of Sunderland, told students about his experience. He said: “I was in the 1st Battalion Parachute Regiment for three years and am now in the reserve unit, the 4th Battalion.

“I was always an outdoor type at school and joined the Paras because I thought it would be great to get paid for it. On top of the military training I’ve been on driving and medical courses and have the chance to take part in all sorts of exciting activities.”

Darlington College Level 3 uniformed public services student Ollie Rickaby, 17, of Richmond, has already spotted the potential for career development. He said: “I’m hoping to join the RAF Regiment as an officer as a way of seeing the world, studying a degree without accruing the debt and eventually joining the police.”

His classmate Katie Clarkson, 17, of Northallerton, added: “My family were in the military and at the moment I’m trying to decide between joining the Royal Signals or being a combat medic. Either way it’s a great way for me to see the world.” 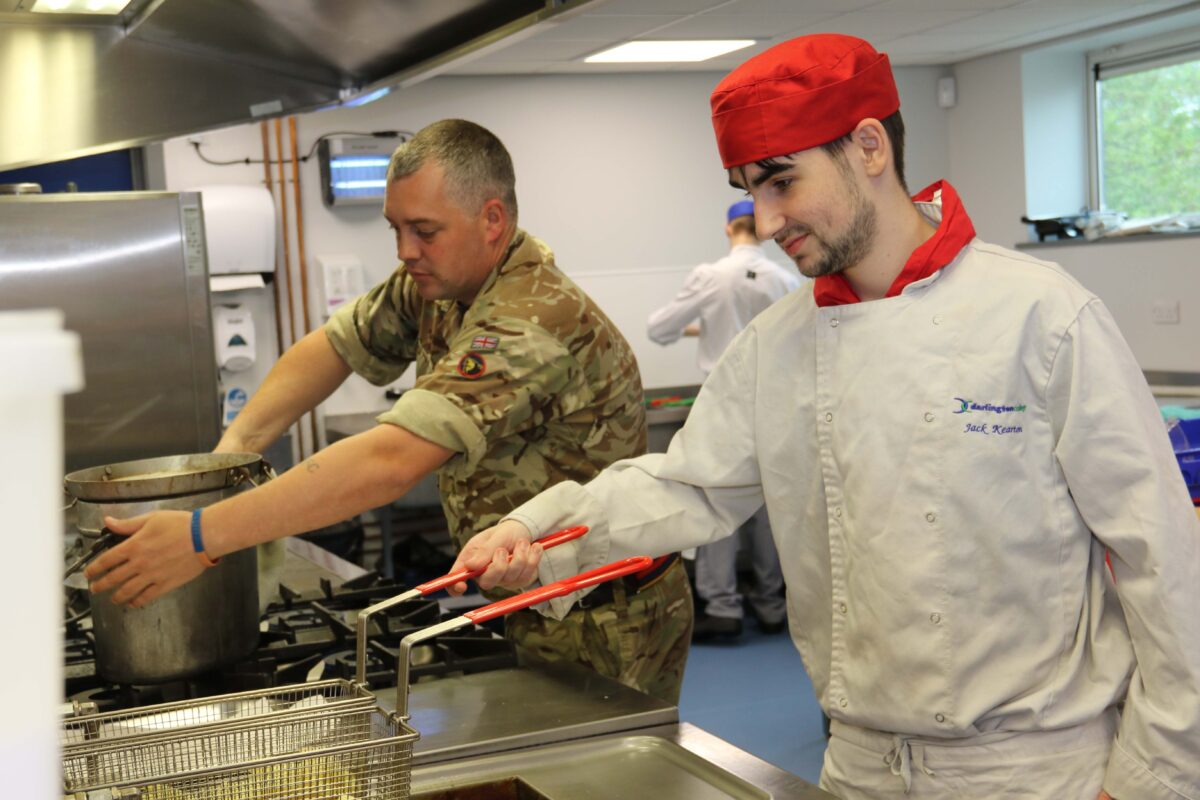 Visitors to the college’s restaurant were also offered the chance to get a taste of army life with a military menu being served in the Glasshouse prepared by Level 1 and 2 catering students with the help of army chef L.Cpl Arran Hopper.