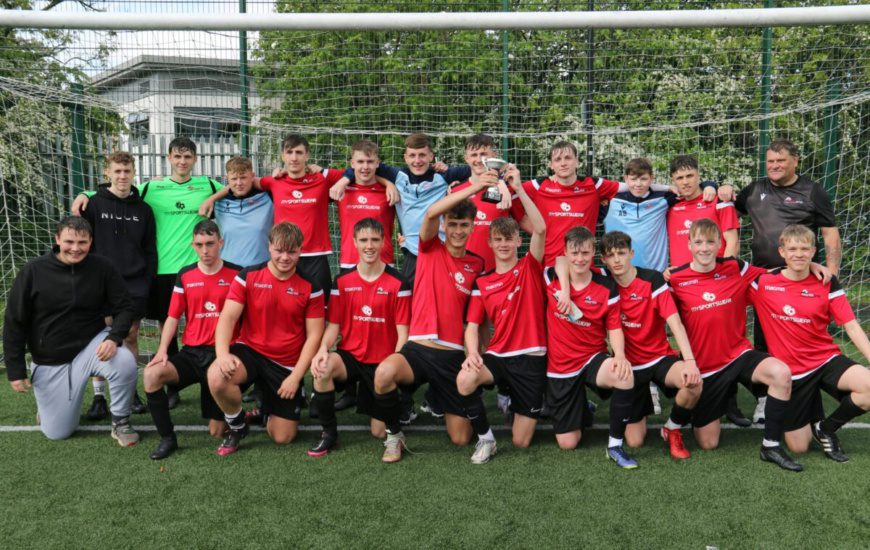 A UNIQUE partnership which blends top quality football coaching with education is celebrating another goal after its students won the league.

The final match of the season against second-place UFCA Ralph Thorseby, from Leeds, was the cherry on the cake with a convincing 4-2 home win.

Former professional footballer and manager Martin told the students: “You have worked so hard and I’ve seen a massive improvement in your skills and attitude. For those staying on next year it will be better than ever. It’s been a pleasure working with you for the past two years. You have been absolutely outstanding.”

The team won 13 of its 14 matches, which were played all over the North from Newcastle to Doncaster, losing just a single game. Players scored a total of 55 goals but only conceded 17.

Martin said: “To travel the distance they have and consistently win matches whilst also completing their college work is testament to the boys’ commitment. On top of this, many of them also played at a high level on a Saturday. They have done really well at college and are a credit to the academy.

“Darlington College tutors also really enjoyed teaching them. The boys took what they learned at the college onto the pitch and just kept developing. I have seen them grow in maturity and take responsibility for their set pieces and their college studies. It’s been a really good year for the first team and the development squad, a total of more than 40 students.”

Team captain Jack Clarkson, 17, of Newton Aycliffe said: “I’m so proud of the lads winning the league. Beating the second place team today was such a great way to end the season.

“The coaches and college tutors have been so supportive and I certainly feel I have improved massively and my confidence has been boosted. My studies have gone well too and I’m looking forward to next season.

“I love playing games on a Wednesday afternoon and hope that we win the league next year as well. The course is a great mix of football and studying and I would certainly recommend it.”