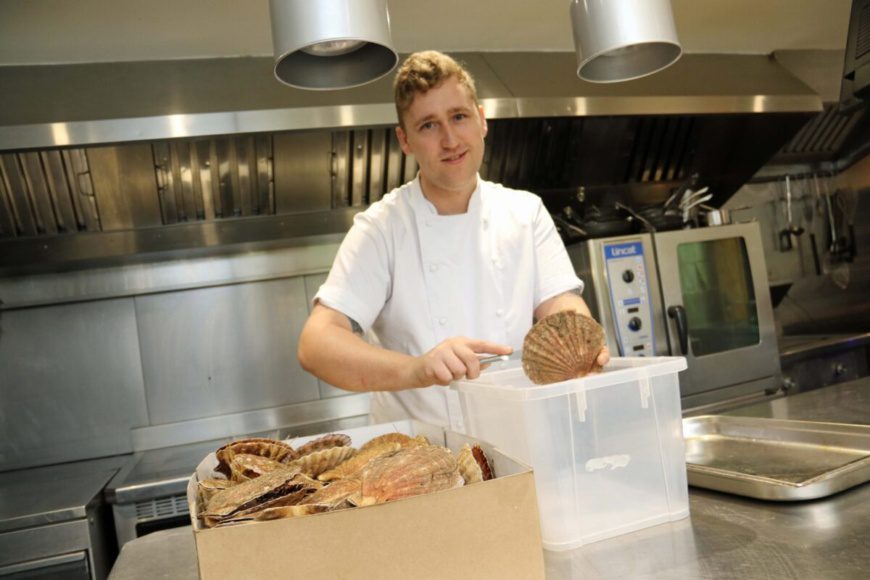 A CHEF has inspired the next generation of catering students even before they start by helping to secure his restaurant a coveted Michelin Star.

As head chef of York restaurant Roots Sean Wrest was being awarded the coveted accolade, staff at Darlington College, where he studied, were conducting a virtual open evening with prospective catering students.

“I was also keeping an eye on the Michelin results and when it came through that Sean’s restaurant had secured a star I was able to tell the young people that this is what they could achieve,” said senior lecturer Dawn Cobb-Neate, who was his tutor.

“The whole department is absolutely buzzing. It is such a phenomenal achievement in such a short period of time. Sean was always determined and passionate about food and his success is certainly inspiring young people.

“I visited Roots last year and knew it was only a matter of time before it secured a star. It is brilliant and the food is amazing.”

Sean said: “I have such a great team down there who all work exceptionally hard. Like the rest of the industry, we have had to overcome a host of obstacles because of COVID and this award is down to them and I could not be prouder of them.”

After attending Leyburn County Primary School and Wensleydale School and Sixth Form College, where he studied A Levels in RE, history and law with a view to joining the police force, he began working as a pot washer at the pub in Wensley, which stimulated his interest and led to an apprenticeship with the well-respected Sandpiper Inn, in nearby Leyburn.

At Darlington College he became a professional cookery apprentice, securing Level 2 and 3 qualifications.

Three years at the Sandpiper Inn under the watchful eye of chef patron Jonathan Harrison proved to be the perfect training for Sean’s next post, an internship at the renowned Fat Duck in Bray, the three Michelin star restaurant owned by Heston Blumenthal.

After moving back North, Sean took up a position at Yorebridge House, Bainbridge, before honing his craft at the chic fine dining restaurant Maaemo in Oslo.

He then secured a job as sous chef at Tommy Banks’ celebrated Michelin star restaurant The Black Swan, Oldstead, near Thirsk, where his girlfriend Sam Haigh is now restaurant manager.

Then 18 months ago he became head chef at Tommy Banks’ other restaurant, Roots in York, transforming it from a sharing plate eatery to a venue renowned for its tasting menu.

“COVID helped us take the decision to shift when we reopened in July as sharing plates no longer seemed appropriate,” he said. “Coming from an existing Michelin Star restaurant really helped as I was able to take the skills and the ethos with me and, of course, it is Tommy’s restaurant.”

While Roots is currently closed, Tommy’s latest venture, Made In Oldstead, is going from strength to strength and keeping around 50 staff busy. The enterprise is a premium, at-home dining experience offering three and five-course menus for delivery across the UK.

Sean is spending his lockdown time researching recipes for when restaurants can reopen and also planning menus for another project with Lords Cricket Ground.

Since leaving Darlington College he has returned on several occasions to work with students as they staged fine dining evenings in the Glasshouse Restaurant.

“It is so important to put something back and encourage young people into the industry,” he said. “This used to be a job people fell into but now it presents so many amazing opportunities.

“Darlington College is a great starting point then it is up to us to inspire and support these young people in their careers. If we don’t we risk a skills shortage in years to come. When I was a Darlington College there were so many talented students who all went on to enjoy great success.”