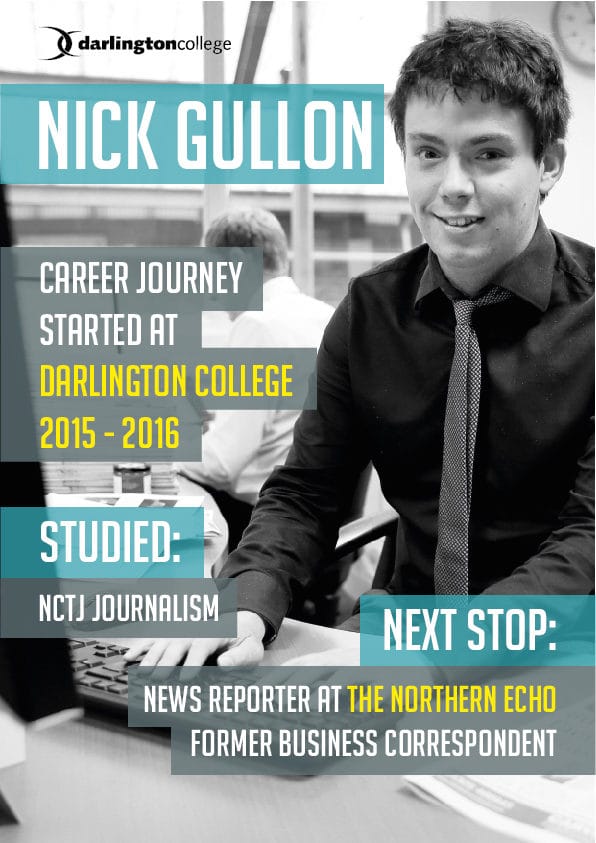 Nick Gullon, who studied NCTJ Multimedia Journalism with sports journalism at the college, is among 43 students, trainees and apprentices from across the country in line for an NCTJ Award for Excellence next month.

Nick, a reporter at The Northern Echo, appears in the sports journalism category alongside two other trainees, from Sportsbeat and MailOnline.

Those on the shortlist were chosen from more than 300 award entries across five main journalism categories including sports.
The winners will be announced at a gala dinner and awards ceremony at Hampton Court Palace on November 23 hosted by Sky News presenter and NCTJ alumna, Sophy Ridge.

Nick follows in the footsteps of other Darlington College alumni.

Northern Echo reporter and columnist Joanna Morris won an Excellence Award in 2013 while journalism apprentice Krystal Starkey, now Lifestyle Editor at Local Link in York, was a runner up in the NCTJ Apprentice of the Year Award in 2015.

In the same year Michael Thurloway took the National Football League award for outstanding performance in his sports journalism exam.