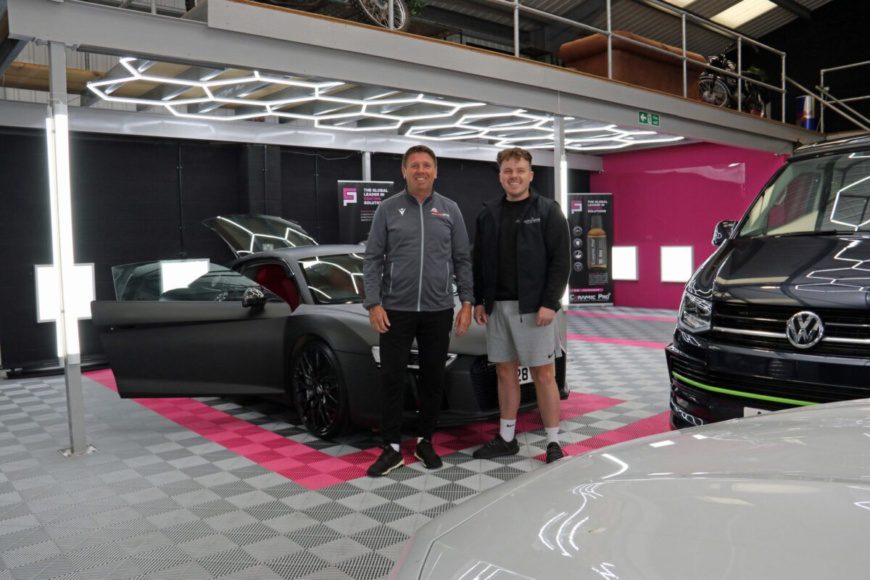 A GOALKEEPER whose sporting dream was ended by injury is paying back the coaches who saved his aspirations of having a professional career.

Ben Abernethy has become the latest official sponsor of the Martin Gray Football Academy which delivers a coaching and education programme with Darlington College.

The 24-year-old, of Richmond, attributes the course with giving him the confidence and entrepreneurial zeal to drive him to launch his own business after a knee injury ended his playing career.

Ben now runs Autoskins and Autospa, employing four staff and six contractors in an automotive customisation centre involving vinyl wrap and paint correction, working with high-end vehicles, many of which are owned by professional footballers.

“I loved my two years with the Martin Gray Academy at Darlington College and would go back and do it all again,” he said. “It was so much fun being with friends all day, learning the football skills, but also being in the classroom which suited me much better than it had at school. I also came out with a L3 diploma in sports science.

“I had to give up being a goalkeeper when I snapped my anterior cruciate ligament and needed two operations. But the course also gave me the confidence to launch my own business involving my other passion of cars, which is going really well.

“It’s fantastic being able to sponsor the academy and help Martin who has been fully behind me since I was 16.”

Martin added: “I am so proud to see one of our ex-students excel and work so incredibly hard to go down this different path and build this amazing business. I’m thrilled to have Ben as a sponsor and there is no better feeling than seeing one of our former students put something back into the community.”

Bespoke paint and protective finishes and wraps are currently on trend since bodywork specialist and influencer Yiannimize Customisation captured the market in London.

Ben and his team now tackle a range of vehicles, from top-end supercars for footballers, including Lamborghinis, Mercedes G Wagons and Audi R8s, to a bright pink wrap on an influencer’s high-performance Mercedes and branded livery on a Citroen Pao coffee truck.

He said: “My aim now is to build the business even more to the point where one day I can franchise it.”