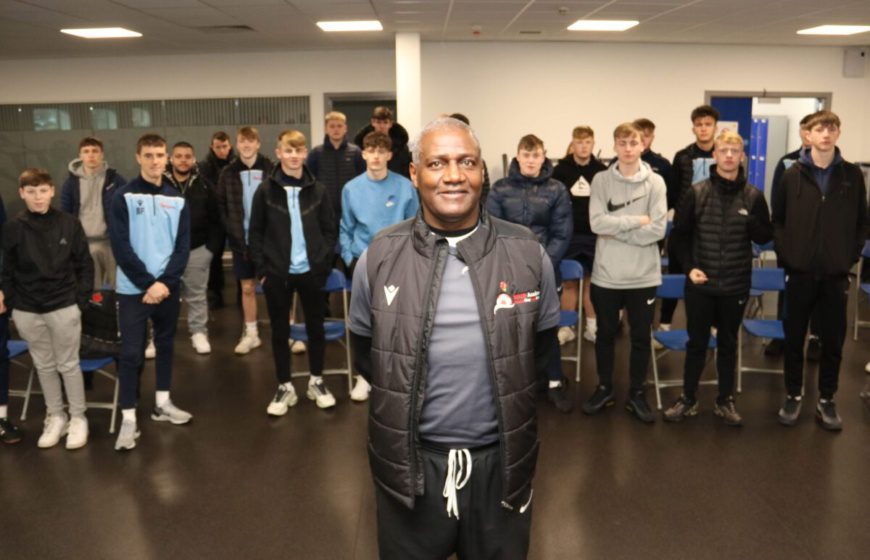 A FORMER footballer who has just received a Queen’s honour for his work combatting racism and promoting mental health has been inspiring students to succeed in a competitive world. 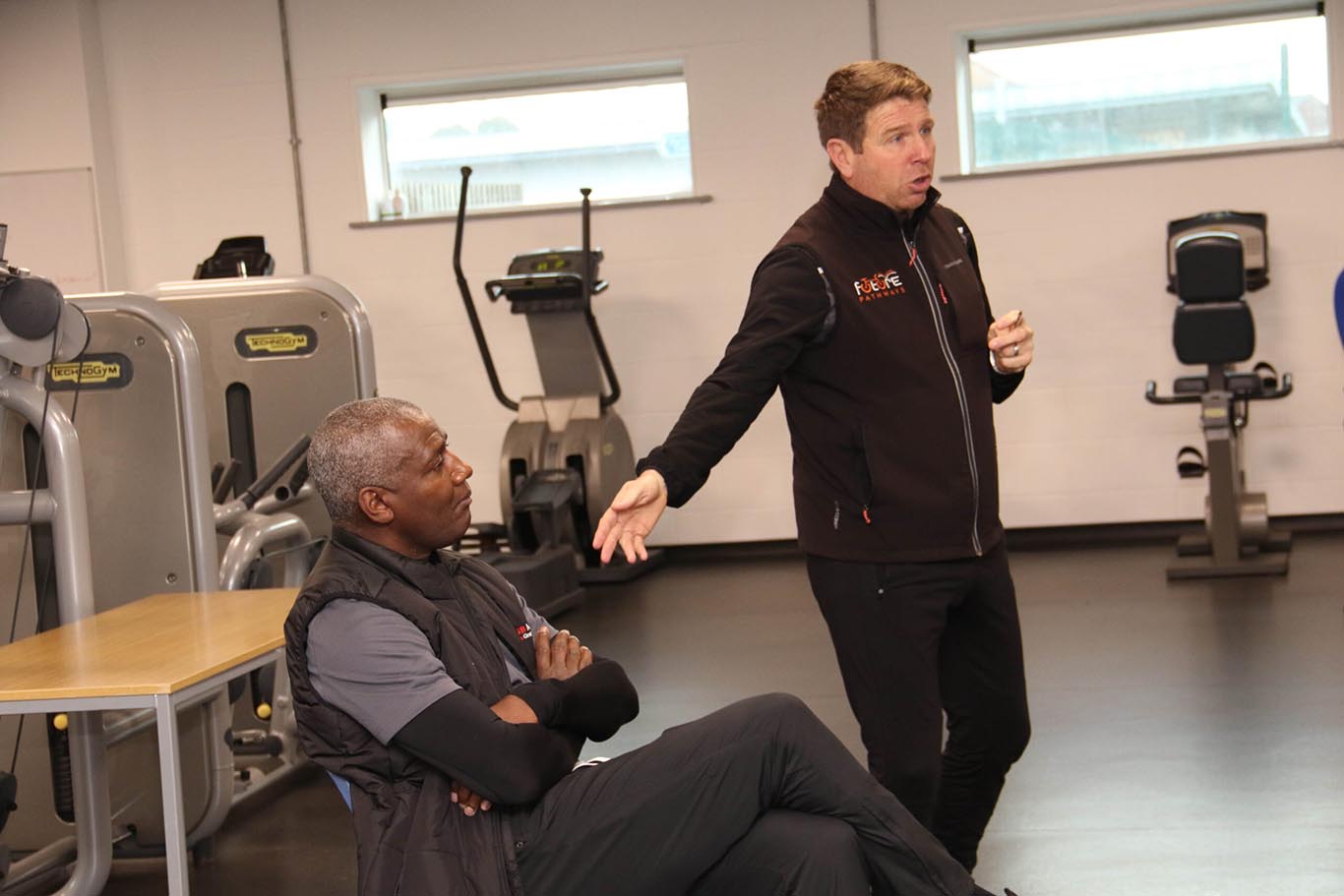 Ex-Manchester City player and Sunderland skipper Gary Bennet has just been awarded the MBE in the New Year’s Honours list for his decades-long campaigning on racism, diversity and mental health issues.

He told Darlington College students in the Martin Gray Football Academy about a career of racial abuse that had led to him trying to educate others on the issue of racism.

“The first thing people see is my skin colour and people can’t stop themselves prejudging,” said Gary, who runs a football academy in Sunderland with Martin, commentates on football for BBC Radio Newcastle, is lead coach for Sunderland University’s football side and is an ambassador for MIND and St Benedict’s Hospice in the city.

“I was once sent off during a derby match between Newcastle and Sunderland and suffered a lot of racial abuse which made me angry. But then I got involved with a charity that made people more aware of racism and I educated myself. Jokes about race and disability used to be considered funny, when they are not. If you hear certain things on a daily basis then you can come to believe them and think that they are ok. But it’s about educating people to find the right language to use.”

He told students that anyone could be the victim of racism which was also based on nationality, culture and religion, not just skin colour. “I was so pleased and overwhelmed to get the MBE for my work because it recognises the work I have been involved in for the past 30 years,” he said. 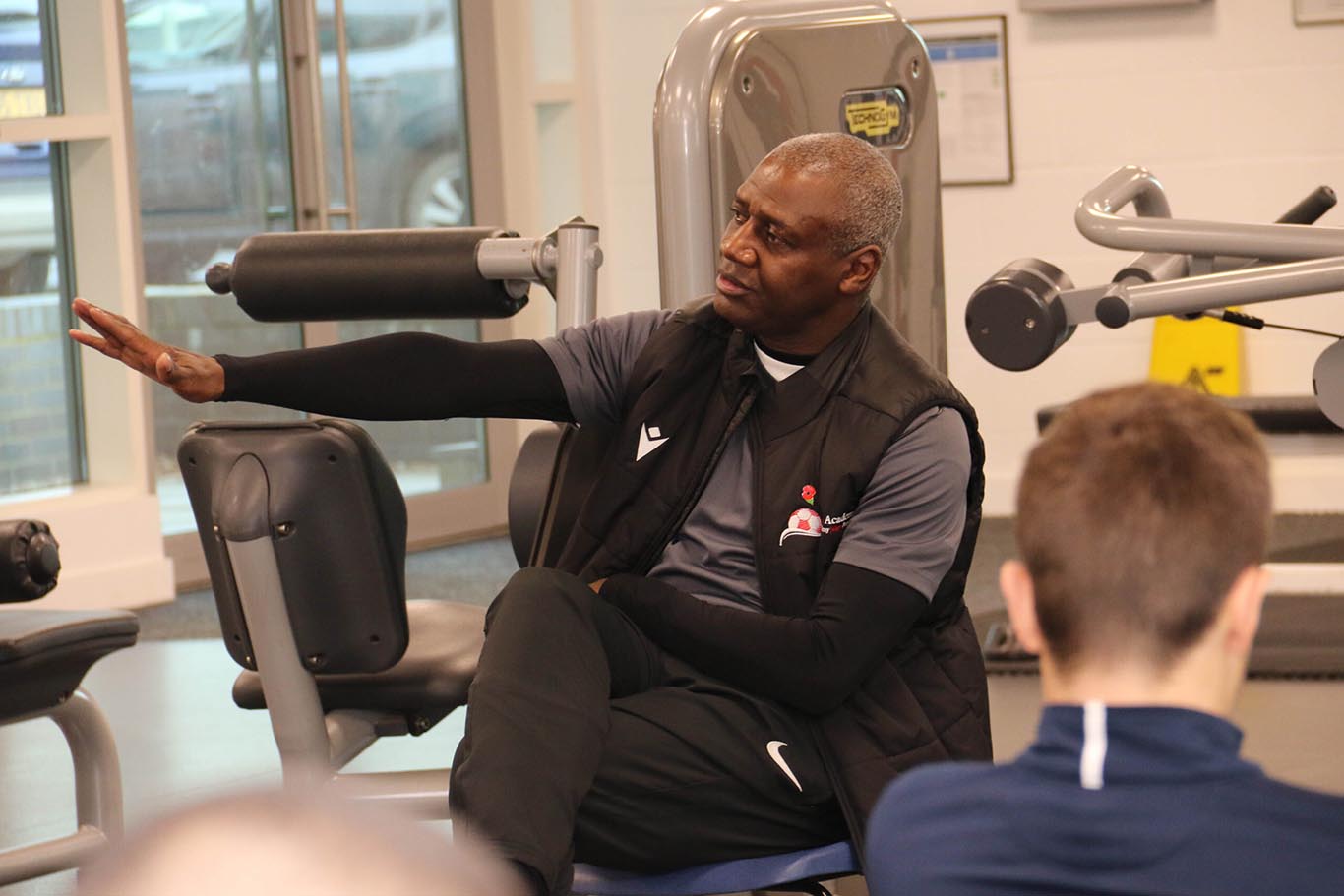 Martin added: “I have been on the pitch with Gary and heard the abuse he has experienced but he has taken these very tough times and made them into a positive by trying to educate all generations. This is something we have to move forwards with.”

The students also heard that sport was a career that impacted greatly on people’s mental health.

“Mental health is the number one topic of the moment,” Gary said. “It affects us all. Only a small percentage of players manage to secure a professional career and it is hard to believe Premiership footballers might have mental health issues when they are paid £40,000 – £60.000 a week, but they do. It is a fantastic career but you are always going to be competing to be one of the best.

“The manager can only pick 11 players to start and if you are not included then you start to question yourself. You might think you are finished so stop trying. You are under pressure to impress every single day for years. Eventually you will dip. You might start to drink or take drugs, you might become addicted to gaming or gambling in your free time and people don’t want to share their fears because they think it looks weak. At this point you really need to speak to someone.”

Martin added: When you are at the top of your game you are on a pedestal but when you come off it you can develop mental health issues because you feel you have no value in life. As a manager you can get hammered by the fans, you can get sacked with a single call one Sunday morning and all of a sudden no-one wants to know you and your so called friends disappear. No-one like rejection and you can feel like you have failed in life. This is why we organise workshops like this one, to ensure you get the best possible outcomes.”

Gary ended the day with an elite coaching session for the students at Eastbourne Sports Complex.