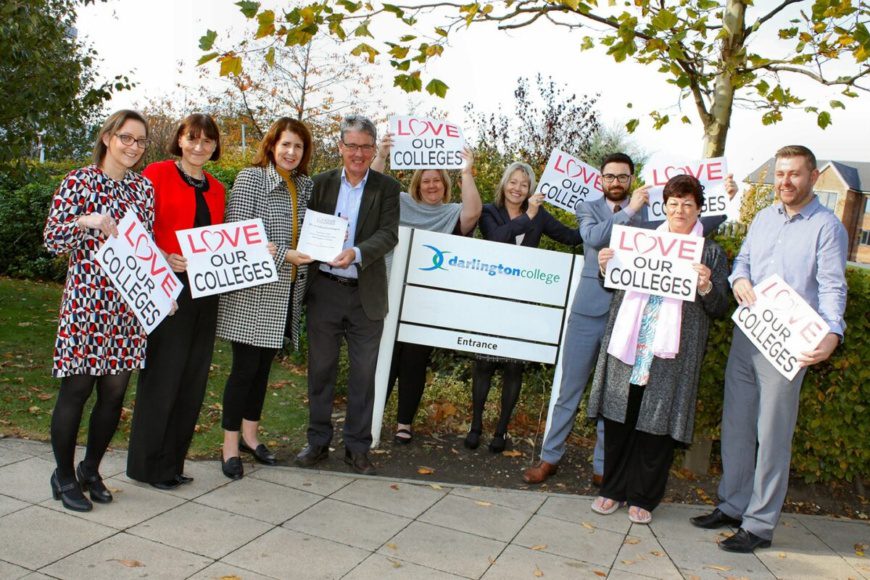 STUDENTS are to have their voices heard in Parliament as an MP takes their appeal against college cuts to the House of Commons.

Darlington College management handed a 500 signature petition to local MP Jenny Chapman to demand fairer financial support for further education colleges after seeing a 30 per cent cut to funding over the past ten years.

The campaign, part of Colleges Week Celebration, follows a recent joint action from North East college principals who protested alongside students and education unions in a rally in Parliament Square, London, to demand increased funding after a decade of decline.

Darlington College deputy principal Carole Todd said: “All week we have had a stand in Central Point giving students and staff more information on fairer funding for further education.

“It has raised a lot of awareness especially among students. Everyone talks about school cuts but further education has been cut for much longer and much deeper.

“It has been fantastic that so many students have wanted to have their voices heard and the petition is still going strong with a national online presence. The whole drive is about getting behind further education colleges which are so important – we change lives here.”

The national campaign, backed by the Association of Colleges, is calling on the government to:

• Increase the 16-19 funding rate by five per cent a year for the next five years
• Extend the pupil premium to cover post-16 students
• Fully fund a National Retraining Scheme to support Level 3 to 5 skills
• Introduce a lifetime learning entitlement to fund skills training for all adults who have not previously achieved a Level 3 qualification
• Provide immediate exceptional funding, ring-fenced for pay, to cover the costs of a fair pay deal for college staff from 2018-19 onwards.

Mrs Chapman was presented with the petition by chair of governors Pat Howarth.

“Darlington College has done a tremendous job making learners aware of the funding crisis for FE colleges, on behalf of their own students and many more across the country who have had their opportunities diminished as a consequence of cuts to this very important sector,” she said

“I will be presenting this petition to Parliament to make a case to Government that the work FE colleges do is not fully appreciated.

“Colleges are vital in providing industry with skilled workers of the future and increased opportunities to young people up and down the whole country.”