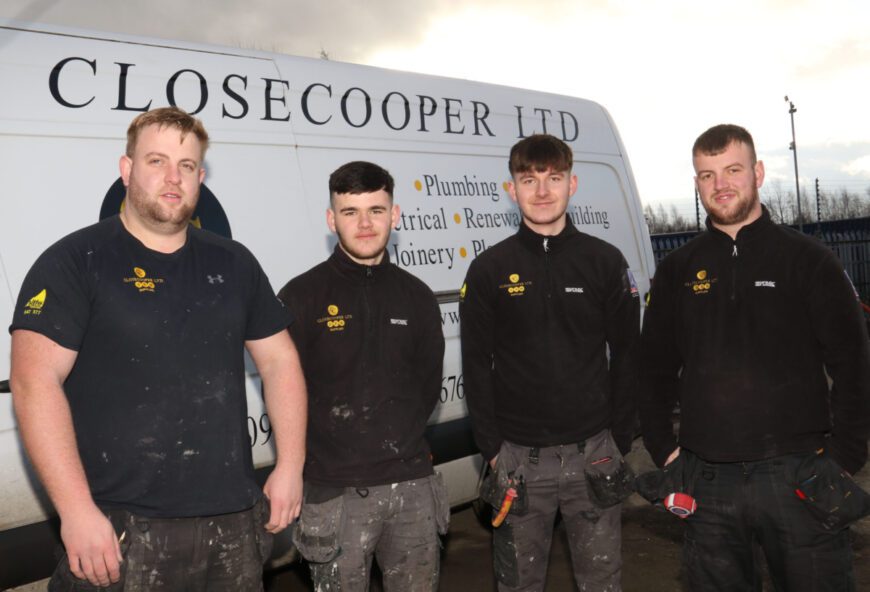 TWINS have spotted a double opportunity as they follow in the footsteps of brothers running a successful company as it embarks on the next stage of its development.

Darlington College apprentices Jacob and Ben Harle have been taken on to learn their respective trades of electrician and plumbing by brothers Davis and Drew Closecooper who are currently expanding their business in the town.

The Closecoopers were themselves apprentices around eight years ago after leaving Haughton Academy.

“Our Dad had a plumbing and heating business and we thought if I learned to be a plumber and Davis became an electrician we would be able to tackle most jobs,” said Drew, 26.

“The apprenticeship route proved to be really useful to us after leaving school as it meant we could earn money, gain our independence and learn a trade,” added Davis, 24. “It meant we got on site straight away gaining a host of experience rather than just studying the theory and learning skills without amassing debt.”

Now the brothers are putting their skillset to good use with a thriving business that is expanding into kitchen and bathroom supplies and renewable energy, as they fit out their new premises in Albert Hill Industrial Estate where they employ eight staff.

Their expansion has allowed them to take on Jacob and Ben, 17, who are now reaping the benefits of the experience of Darlington College lecturers and their bosses.

Jacob said: “We study one day a week at college and work the other four which is a good mix. I joined first then mentioned to Drew that Ben wanted to be a plumber so he signed up to do that and it is going really well for both of us. It’s a good company to work for and the college tutors are great and know a lot about our trades. Being paid to learn also means I can save up for a car.”

Curriculum Manager for Construction, Building Services and Science said: “It is great to see the twins following in the footsteps of the Closecooper brothers who have worked exceptionally hard to get where they are today and are a brilliant example of what can be achieved in life following an apprenticeship.”