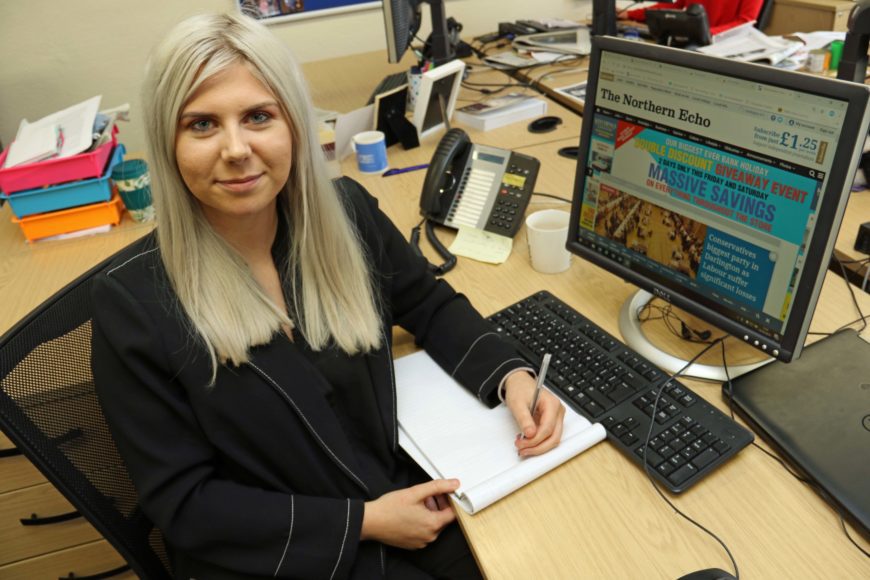 A TRAINEE journalist has renewed focus after securing a distinction in her apprenticeship thanks, in part, to an investigation into children distributing inappropriate images.

Darlington College apprentice Georgia Banks has secured a reporter’s position with The Northern Echo where she wrote a feature on the doubling of the number of children ‘sexting’.

The 21-year-old, from Wheatley Hill, County Durham, also used her actor contacts to produce a video featuring the harrowing case study of a child involved in the practice.

“I discovered that children as young as seven were unintentionally committing a sexual offence and making themselves vulnerable to online predators by taking and sending the indecent images,” she said.

“I studied creative media production at college and used those skills and the contacts I’d made with actors to produce a video based on a case study from the NSPCC. It was a sensitive and harrowing topic but really rewarding to do.”

As a Newsquest trainee Georgia works from the Bishop Auckland office producing news and features for the group’s papers and on-line digital platforms. Over the next 18 months she is building a portfolio of work to secure the National Qualification in Journalism required to be a senior journalist.

“The apprenticeship was great as the things I learnt at Darlington College about journalism, law and public administration help me so much in the job,” she said. “Now I love hard news – I recently went on drugs raids with the police which was amazing – and am enjoying writing and the multi-media work.”

Journalism tutor Sue Calvert said: “Georgia produced some excellent work and her investigation showed just how far a story can develop from a simple request through the Freedom of Information Act. We are delighted that Newsquest has recognised her talent by offering her a position.”