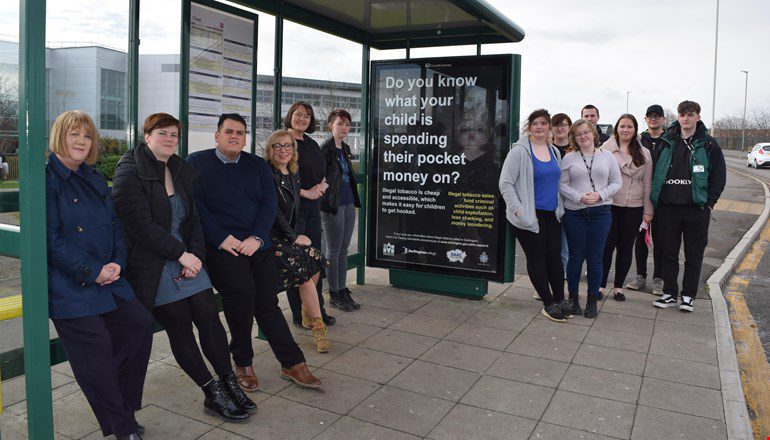 A special poster campaign in Darlington has been hailed a success in helping tackle the illegal tobacco trade.

DARLINGTON Borough Council’s Trading Standards and Public Health Services, teamed up with Durham Police and the Durham Agency Against Crime (DAAC) to coordinate the campaign, which ran earlier this year.

They invited Darlington College art and design students to create a series of posters for the campaign, which were used in bus shelters at key sites in the town and it’s estimated they were seen by almost 755,000 people – a mix of passing traffic and pedestrians.

The campaign aimed to raise awareness of the problems caused by the sale of illegal tobacco and cigarettes, particularly to under-age children, and encourages the public to report any issues to Trading Standards.

“The eye-catching posters created by the students really helped us raise awareness of the problems that sales of illegal tobacco can cause and we were very pleased with the results.

“The impact of the campaign was magnified further as we were able to use the bus shelter adverts elsewhere too, including the One Darlington magazine and social media.

“We’re very pleased with the results, as the campaign successfully shone the spotlight on the sale and supply of illegal tobacco in Darlington and highlighted the harm that can be caused, particularly to children.

“During the period of the campaign we saw an increase in ‘hits’ on the Trading Standards’ pages of our website and there were several anonymous reports about sales of illegal tobacco. This intelligence will be used as part of our enforcement strategy in the months ahead.”

“We were so impressed with the quality of artwork produced by the students, there are already plans to use the posters in other settings showing the diversity of the designs.  Their efforts on this campaign have reduced the harm caused in our communities by illegal tobacco and will continue to do so in the future, we want to thank them again for their hard work.”

Members of the public are encouraged to pass on any information about illegal tobacco sales in Darlington to Trading Standards anonymously using the online ‘Report It’ form at: www.darlington.gov.uk/ts-report-it

All submissions are anonymous (you can leave contact details if you would like to be updated) and you do not need to register to submit the form. You can also visit the Keep it Out website – www.keep-it-out.co.uk  – or ring the illegal tobacco hotline 0300 9990000.