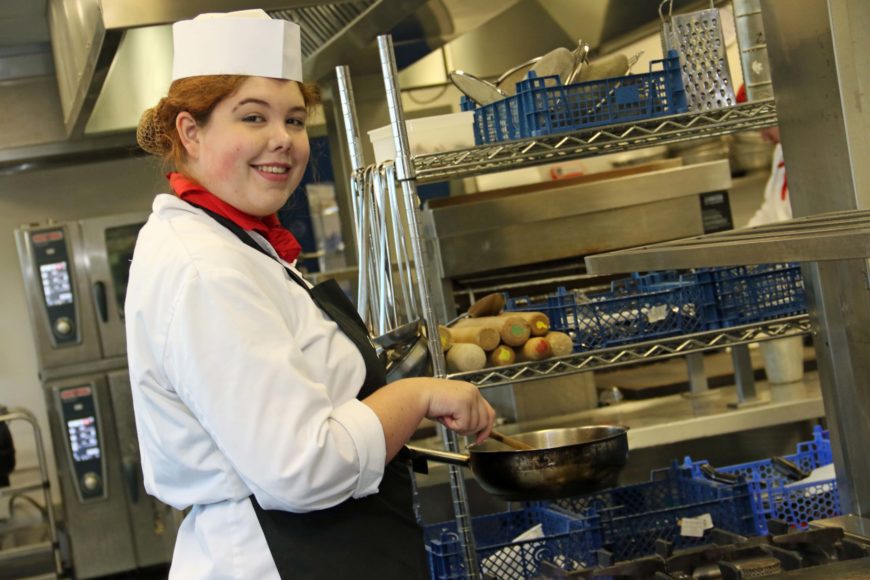 A STUDENT is cooking up a storm after securing a place in a prestigious competition final just weeks after starting her catering course.

Darlington College student Myah Erasmus has won a place in the final of the Young Risotto Chef of the Year contest with a dish she first cooked on a taster day in the catering department.

The 18-year-old, of Spennymoor, decided catering was much more her taste when she switched from an engineering course to study Level 2 professional cookery.

Within weeks of starting and days of turning 18, she applied to take part in the Gallo Rice Young Risotto Chef of the Year contest, competing in the regional heat in Middlesbrough with her take on the popular dish.

“I was up against working chefs aged 23 and one actually butchered a bird to use in his risotto,” said Gateshead-born Myah, a former pupil at Durham High School for Girls. “I had a few peas and a bit of pancetta so didn’t expect to win.”

But the panel of judges found her risotto of goats cheese, pancetta and pea broth – a dish she modified for the first time on the day of the regional heat – very much to their liking.

She will now compete in the final at Westminster Kingsway College, London, on January 20 which will be judged by some of the industry’s best chefs.

At stake is the prestigious title and the chance to win a three day experience with celebrated chefs Jeff and Chris Galvin, at the Michelin star London restaurant La Chapelle, or at the Italian Embassy with chef Danilo Cortellini, plus a visit to the Riso Gallo Rice Mill in Italy to cook for the founding family.

Her tutor Dawn Cobb-Neate said: “She cooked the dish for me when she did the taster day and it was absolutely beautiful. She really is one to watch.

“It’s the first time we have ever had a student in the final and everyone is feeling very proud of Myah. The fact she won through after just six weeks at college is testament to how hard she works.”

Myah said: “I have always loved cooking and food science. Catering is such a great profession which can open so any doors around the world. One day I would love to have my own restaurant – perhaps in Portland, America – and even achieve a Michelin star.”