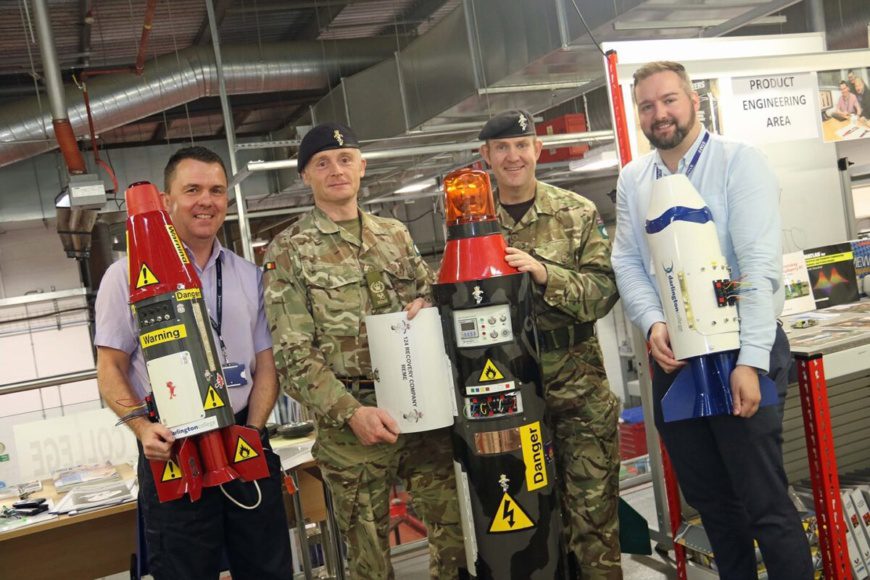 They have spent the past weeks servicing the STEM problem solving device that had originally been donated to 102 Battalion REME in 2013.

The inert device simulator resembles a rocket and has intricate circuitry that puts users through a time critical scenario to read a circuit diagram and identify which wire can be disconnected to stop the clock and prevent alarms and flashing beacons going off.

Over the years the simulator has been used at public shows, such as Durham Regatta, Sunderland Airshow and in local schools and colleges.

Darlington College senior lecturer in electrical, electronics and mechatronics Steve Corner said: “It has had its fair share of knocks and scrapes and some of the circuitry was beginning to fail so we decided to give it a thorough health check and MOT and introduce some exciting new features to meet current build standards.”

Members of 102 Battalion REME support the engineering career pathways of students at Darlington College and offer the chance to join as an Army Reserve on their 18th birthday. This enables them to develop personal and professional skills that are highly sought after by employers.

WO2 Rhodes said: “The Armed Forces encompasses the full range of engineering from basic winches and pulleys to complex electronics and black box technology you find in aircraft. The rocket has been great in capturing the attention of young people so we can then explain the opportunities available to them.”

WO2 Tomlinson added: “We have to inspect and modify our vehicles much more often than in the civilian world and they operate in harsh environments, such as Afghanistan, so are evolving constantly thanks to the skills and ingenuity of our engineers.”

Mr Corner added: “It is a great opportunity for our students to join the Army Reserves and gain an insight into what is available in the forces and defence industry.”

For information about the opportunities available at 102 Battalion REME students should speak to their course tutors, or email 102reme-bhq-roso@mod.uk or call (01325) 375010 and asking to speak to a recruiter.