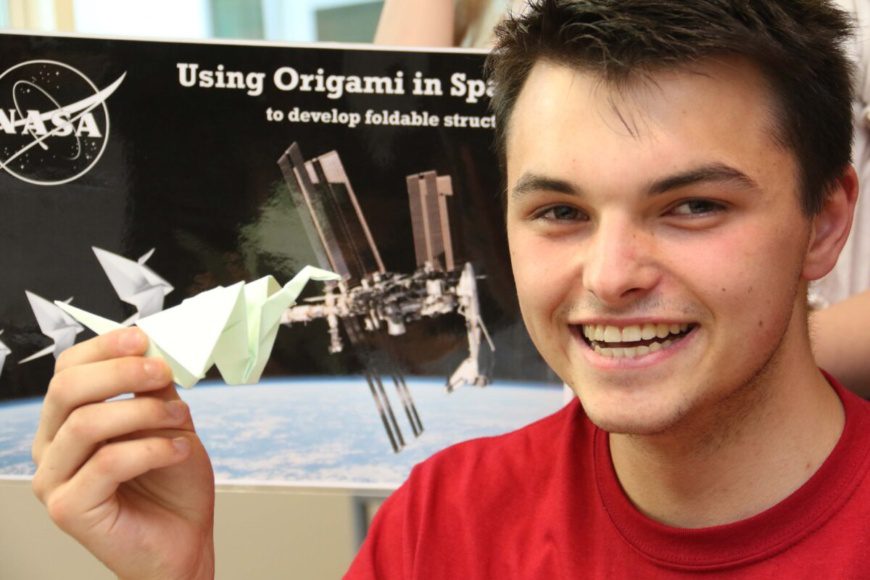 Origami originated in Japan at least 500 years ago and involves the intricate folding of paper to create complex 3D structures.

Darlington College students began by making a paper bird, the crane, as a means to show them the engineering potential of the paper artform.

Tutor Rob Elliott said: “Origami is incredible at showing them how to follow instructions, in sequence, accurately. It is the ideal engineering exercise and helps them visualise in 3D what start as two dimensional plans.”

Students have witnessed how NASA uses the same techniques in space when large solar arrays unfurl from compact packages attached to satellites. They are also shown how origami plays a part in medical science with nano-injectors and gene therapy.

Mr Elliott said: “Origami shows motion in a way that could not be calculated mathematically. It exhibits the benefits of compliant mechanisms that rely on bending and deflection, that only work because of the flexibility of paper.

“It is so useful in space research because there is such limited space on rockets and origami allows large structures to be compacted for launch. It is also invaluable in testing prototypes because paper is such a cheap material.”

First year student Samuel Johnson, 16, of Stockton, said: “Origami is incredible and something I simply had not thought about before.

“I’m interested in green engineering and in making energy production pollution-free. I can already see how origami could be useful in modelling.”

Student Chhitij Singh, 16, of Catterick Garrison, added: “When I lived in Brunei I was in an origami club but hadn’t realised the full implications of paper folding to engineering which are amazing. I’m interested in aerospace and can certainly see how paper folding can be used in design. It will make me think differently in the future and help me visualise in 3D.”