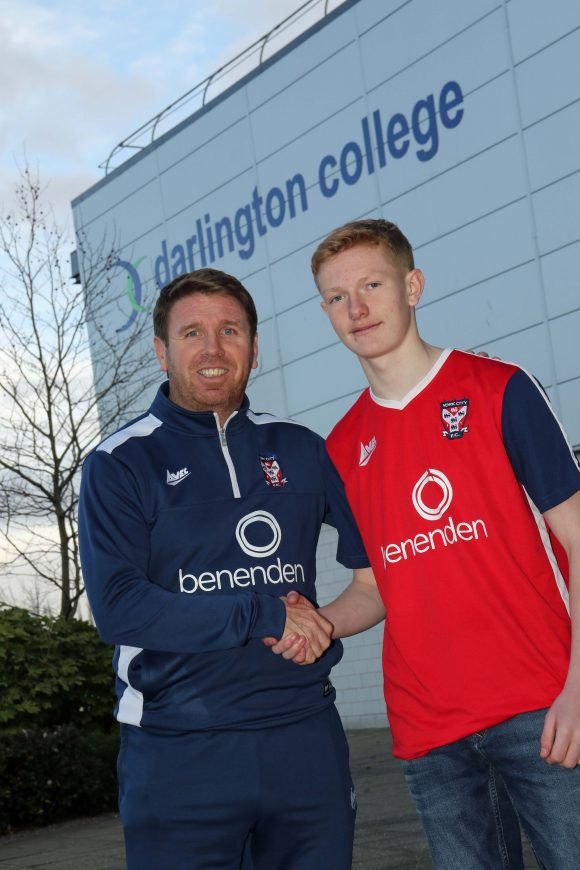 The 16-year-old level 3 sport science student is also part of the Martin Gray Football Academy in a unique partnership between the game and education.

Vinnie, of Seaton Carew, plays on the left wing and made his debut in the 5-2 win against Hartlepool reserves.

As well as developing his considerable footballing skills, he will study sports science at Darlington College including anatomy, physiology and sports coaching.

Martin said: “Vinnie is my first student from Darlington College to turn professional which is a massive endorsement of what we are trying to achieve here.

“He has been on the course about six months, played for Durham County and I am proud that he has signed with York City when some premiership team academies were showing an interest in him. He has already trained and played with us and went straight in at the deep end against Hartlepool.”

Darlington College curriculum manager for sport Alan Jones said: “The great thing about the course is that equal emphasis is placed on the football as the academic studies.

“I am very proud of Vinnie as he is a hard working student on and off the pitch. He has earned this professional contract and I wish him good look with his football career. Vinnie will finish his course with us as he wants to ensure he has options for his future, including going to university. Hopefully he will go on to be successful in the game and it’s great to see one of our sports with football students succeed in the area in which they wish to work.”

Vinnie, a left footer, has been playing football since he was five-years-old and is renowned for his dribbling skills, speed down the wing and ability to score.

“My dream is to play football professionally for as long as I can and hopefully for my country one day,” he said.

“Training and playing with York was great, really intense and a lot harder than I am used to. The Darlington College course is really good as we play a lot of football in the morning then study in the afternoon, which will be so useful if I ever want to go into coaching.”